Kaare and I finally managed to assemble the timing gear on Sunday 8th February.

Kaare has made a great job of developing the electronics and program. I have bought some materials from which to make a protective casing, the results of which are shown in the pictures below.

We will certainly make these units available for sale to the F3F community. Producing these in small numbers from our base in Norway is certainly not the cheapest method of production, but we hope that even clubs of modest size should be able to afford this unit.

What is so special with this timing gear unit? Well, we have incorporated the weather station in a very simple and effective way.

Todays F3F rules are rather simple except for one major aspect, the wind and direction measurement.

We have considered this rule in detail, and designed a system to simplify the Contest Director's job, by providing accurate and meaningful information.

By capturing wind and direction measurements from leg one to leg ten, average values can be calculated for both parameters, and the results displayed along with the time of the flight.

As such, the CD or timing gear operator will be empowered to confirm the validity of the flight conditions.

The functionality will also enable the CD to define the windspeed range for the chosen slope, if required. It must be recognised that not all slopes produce sufficient lift at 3ms/+-45 degrees direction. If the CD sets a value for the given day we now have a machine to monitor weather activity throughout the competition lifecycle.

We also recommend that the pilot finishes the flight irrespective of conditions, and receives confirmation of the validity of the flight. The pilot can then decide whether to retain the flight or request a reflight if the conditions fall beneath the predefined limit. The pilot may wish to retain the flight if a thermal was experienced on course, in which case the pilot's wishes should be honoured. (Or maybe not, I would leave that to the CD or a definitive rule change)

Aside from specific rules, the weather station also possesses functionality which is also interesting. During training sessions it can be very valuable as testing becomes more accurate as variations in the weather can be seen very easily.

Very often it is difficult to judge whether a flight was successful because it was flown well or if conditions were particularly good. Now you have a tool to take care of at least the wind and direction and tell you from flight to flight what happened. We have not yet figured out how to find the thermals but we are working on it. It is possible to add sensors to the unit.

The TGW (Timing Gear Weatherstation) will be delivered without the wires needed to A and B base. Apart from that it will come with the wind/direction meter as shown in these pictures.

We have made it with coax bayonet connectors to make sure of a solid and relatively weather proof connection. We deliver small coax cables (with the connector) so users can solder these to their own cables. The weather station has the same coax connector. The signal horn will be made (not ready when pictures was taken) with a separate connector to prevent mistakes.

The unit has a serial port which can be used to dump results to a Laptop or similar or dump the last result to a screen for the spectators to see.

It also comes with a rechargeble battery which will last all day long....

We might need to change the box itself as this one was rather expensive here in Norway.

We are already working on some "add ons" to the unit.
First on the list will be a MP3 player counting the 30 second to enter the course.
Secondly we would like to utilise the serial port by sending the data to a laptop using a wireless connection. The laptop could be placed in the area of the crowd and could display results as it happens. Furthermore take care of the data and store them. In the end I hope someone can make a scoring program. 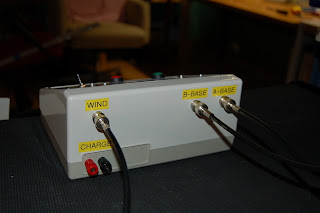 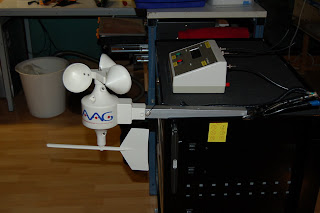 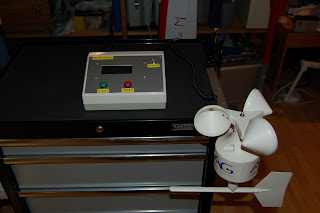 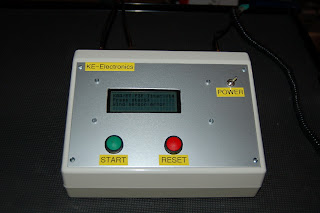